Now that I have your attention, get your mind out of the gutter. I’m talking about blood pressure cuff bulbs, you perverts.

Here is a picture of two standard issue cuffs, but you’ll notice they aren’t the same. 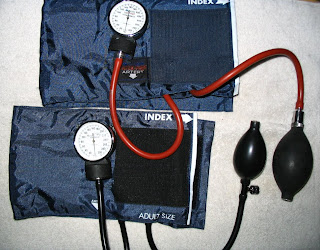 You’ll notice two differences other than that the top cuff is Latex free. The first, probably less noticeable, is that the tube lengths have been shortened. I, and everyone I work with for that matter, cut the tubes to a shorter more manageable length. This reduces the tangle factor and makes it easier to put the cuff on the patient. I’m not sure why, but all of the manufacturers ship the cuffs with long tubes. It wouldn’t appear to be a result of careful calibration and measurement as I’ve never noticed any difference in my blood pressures and those taken in the hospital. Other than that mine are generally more accurate than machine generated pressures, of course.

The bigger difference is in the size of the inflation bulb, hence the title of the post. I don’t remember where I picked this trick up and I certainly didn’t come up with it on my own. I’m guessing that some crusty old EMT showed it to me as I’ve done it forever and ever. Again, the only effect this modification has is to speed up the process. The volume of the larger bulb is at least double that of the smaller one and so it only takes half as many squeezes of the bulb to inflate the cuff.

“Where, oh great one, can I get my own big bulb like the EMS big boys?” Don’t ask Bob, he can’t help you. The W.A. Baum Company makes large sized bulbs and a lot of BP cuffs too. If they won’t sell direct to you, they will point you to a retailer who will. I got mine from Moore Medical, but they add a service charge to small orders now, so you will want to shop around. You should expect to pay around $12.00 for the bulb and air control valve. The Baum part number is 1894 for both, and 1894NL if you want the non Latex version.

I don’t think this trick has ever saved anyone’s life or anything momentous like that, but it’s a neat little trick that does speed things up and make things a bit easier.

UPDATE: A quick update for the compulsively obsessed. Yes, the tubing is latex free, but the bulb isn’t. I corrected that by ordering the 1894NL, which came in the mail today. Until I can get an updated picture uploaded you can imagine that the bulb is red. Or you can crayon in red on the screen, but I’m not so sure that’s a good idea.

Medications We Don’t Use Any More

What we do, what we don’t do

EMS Artifact - May 27, 2008 2
EMS is funny in that we are good at crisis management, but generally not so good at long term management.If you think about it,...

The one where he rants about Pulse Oximetry

EMS Artifact - June 2, 2008 18
Maybe not a complete, out of my mind, drooling, almost incomprehensible rant, but a rant none the less. Pulse Oximetry was hailed as the...