In 1889, the Swiss Military adopted a series of rifles using a unique straight pull bolt a 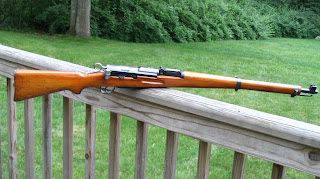 ction. The first in the series, the Schmidt-Rubin 1889 was discontinued in due to problems with the ability of the bolt to sustain the pressures of the 7.5mm cartridge used. Several design changes were made and tested and the resulting rifle, the 1899/96 was adopted in 1896. The changes had resulted in a stronger action and more accuracy.

Field service resulted in several relatively minor improvements to the existing stock of rifles and most were converted from the 1899/96 model to the 1896/11 in the years before World War I. One of the improvements made to the 1896/11 was a change in caliber to a 7.5 x 55 mm cartridge that was more powerful and accurate than the older 7.5 x 54 mm round. Both rifles were used up until the early 1930s.

Starting in the 1920s, the Swiss started to design and test a new, lighter, shorter, more accurate rifle for service with the Swiss Army. The result was the K31 Carbine which was issued starting in 1932. The K31 was the standard issue rifle for the Swiss until it was replaced by the fully automatic Stw 57.

Over 500,000 K31 rifles were produced and issued to the Swiss military. Within the past five years, a considerable quantity of surplus rifles have been imported into the US. They became instant collector items and prices have risen while the quality of the rifles currently available has dropped in many cases.

Because each rifle was issued to a soldier for the term of his reserve service, most K31s are actually in pretty good condition. Many of them do have beat up stocks, the so c

alled “Chewed by a Beaver” look from being rested in the snow while the soldiers were on maneuvers. There don’t seem to be a lot of replacement stocks for sale, so if you should be in the market for a K31, check the condition of the stock carefully. Also, many K31s can be found with a tag under the butt plate with the name, unit, and Canton (province) of the soldier it was issued to.

The pictured rifle was produced in 1951, which makes it a later production rifle. Which is why it is in very good condition. It came with no tag, so there is no way of knowing who it was issued to or when. I have a sling and muzzle cover and I’m looking for a bayonet to complete the collection. If you happen to have a K31 bayonet hanging around, let me know.

A couple of K31 trivia items. 100 were made for the Vatican Swiss Guard. 300 were made for shipment to Nicaragua, but ended up going to Israel in 1949. Other than that, no other country used the Schmidt Rubin action.

For more information on all of the Swiss Straight Pull rifles you should go to Swiss Rifles. Interesting reading on a series of very interesting rifles.

EMS Artifact - May 26, 2008 5
If you know military rifles, you know what I'm talking about. If you don't you probably couldn't care less about this post.The SMLE was...

EMS Artifact - July 6, 2008 5
One of the most successful revolver designs ever made by Smith and Wesson was the "Safety Hammerless" series of pocket pistols. First introduced as...