One of the most successful revolver designs ever made by Smith and Wesson was the “Safety Hammerless” series of pocket pistols. First introduced as a .32 caliber top break pistol in 1888. Variations and different models in various calibers were produced continuously until 1940. These guns were known as “Lemon Squeezers” because of the safety lever built into the back strap. The lever had to be squeezed to disengage the internal safety and allow the weapon to be fired. The idea was to make the weapon safe to have around the home, but still ready to 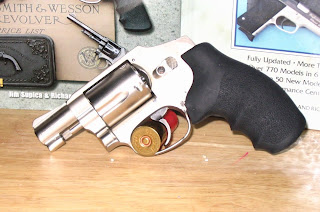 fire in an instant. The theory being the little children would not have the strength to squeeze the grip hard enough to make the weapon fireable.

In 1950 Smith & Wesson introduced the J frame series of handguns. The first revolver produced was the “Chiefs Special” five shot double/single action. Chambered in .38 Special, J frame revolver proved to be a very popular self defense weapon and is still in production today.

In 1952 Smith introduced the “Centennial” model, so named to mark the 100th anniversary of the founding of the company. The Centennial was a concealed hammer version of the Chief special designed for pocket carry. The absence of an exposed hammer made the gun easy to draw from a pocket or concealed holster without risk of the hammer snagging. In 1957 Smith instituted a system of model numbering that replaced the model naming previously used. The Centennial became the Model 40. The Model 40 was still a “Lemon Squeezer”, but a pin was included with each unit produced for those who preferred not to have to squeeze the grip to fire the pistol. Introduced at the same time was an Airweight model that featured and allow frame with steel cylinder. Both models were made until 1974 when production stopped.

As noted, production of other J frame revolvers continued including the shrouded hammer Model 38 Bodyguard pistols, but no hammerless models. 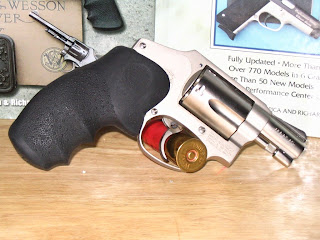 Centennial models became collectors items and rarely appeared on the used market. From the time that they went out of production there were requests from professional gun writers and potential owners for Smith to reintroduce both models.

In 1989 S&W introduced the Model 640 J frame revolver chambered in .38 Special, but rated for +P ammunition. Since then a number of different models have been introduced including the 640-1 in .357 Magnum. Variations are in production in .32 Harrington & Richardson Magnum as well.

Also produced for a short period of time was the Model 940 in 9mm parabellum. Revolvers chambered for semi auto cartridges are rare and generally not too popular, the S&W Model 25 being an exception. Like most S&W revolvers, especially the rare ones, these command a premium if you can find one.

The pictured gun is a 442 in with satin finish plating. I’ve added Hogue Monogrips to make it a bit more comfortable to shoot, but like most J frame revolvers this is a gun to be carried a lot and hopefully never fired. It’s a very good self defense weapon that is easy to carry, easy to draw, and accurate at close ranges. Add a Mika Holster and you have a very nice weapon to carry for self protection.

Smith & Wesson has recently introduced their “Classic” line of revolvers based on older designs that are considered, well, classic. One of these is the Model 40 complete with Lemon Squeezer safety lever. A bit spendy for my taste, but I’m sure that the collectors will love it.

NOT The Way To EMS

The Further Adventures Of Clock Boy

EMS Artifact - May 26, 2008 5
If you know military rifles, you know what I'm talking about. If you don't you probably couldn't care less about this post.The SMLE was...

EMS Artifact - June 27, 2008 0
In 1889, the Swiss Military adopted a series of rifles using a unique straight pull bolt action. The first in the series, the Schmidt-Rubin...