Part the second. The debate came down to Ventricular Tachycardia versus Atrial Fibrillation with aberrancy. At rates of 160 and above this can become hard to differentiate and the text books (and our instructors) tell us that the odds favor V-Tach. Depending on the patient’s previous medical history the likelihood is between 60 and 90% in favor of V-Tach. It’s not a trivial distinction, making the wrong decision can have fatal consequences for the patient. Giving a calcium channel blocker will likely be fatal if the patient is in V-Tach. Amiodarone is safer, but might not be as effective.

Fortunately, the patient’s cardiac system decided to give us a break and show us the answer. 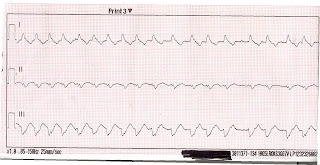 Ahh, no p waves, no fusion beats, wavy baseline. Atrial Fibrillation it is! Still, we decided to run this one by medical control. We don’t transmit EKGs, so there would be no cheating on our part. I would have to describe the patient and the EKGs and ask for their advice.

In the meantime we started an IV, to give about 500 ml (total) of warmed normal saline. Remember the patient was cold as ice, giving cold IV fluid would do him little good. We also drew up 100mg of Thiamine and put together an am of D50. Diabetic or not, being essentially NPO for a week wasn’t likely to help the situation.

Medical control ordered Diltiazem and my partner drew up the calculated 20mg dose. We gave it slooooowly and were rewarded with this reaction from the patient’s cardiac conduction system.

Our interpretation seems to have been spot on. Atrial Fibrillation, which the patient has a history of. One of the things that we might have assumed is that the patient had not been taking his medications. Even at that, it’s not prudent to make any assumptions when the stakes for the patient are so high. Also, the Left Bundle Branch Block complicates the interpretation. While still unable to get a blood pressure, the patient was mentating better (answering more quickly), said he felt better, and subjectively looked better. All of which are good things.

By the way. I don’t routinely do Blood Glucose testing on non diabetic patients who don’t have altered mental status, it was just a hunch that made me do it in this case.

Ironically, two days before I had commented to a student that we never see patients on Digoxin any longer. I can’t remember the last time I saw that on a patient’s medication.

I might seem all “Joe Cool” about this now, but it was a real head scratcher at the time. We were 98% sure it was A-Fib with aberrancy, but that 2% was rather nerve wracking. Of course, we never show that to the patient, it would only serve to undermine their confidence in us. 😉

Medications We Don’t Use Any More

In EMS, Some Things Never Change

NOT The Way To EMS

The Further Adventures Of Clock Boy

What we do, what we don’t do

EMS Artifact - May 27, 2008 2
EMS is funny in that we are good at crisis management, but generally not so good at long term management.If you think about it,...

The one where he rants about Pulse Oximetry

EMS Artifact - June 2, 2008 18
Maybe not a complete, out of my mind, drooling, almost incomprehensible rant, but a rant none the less. Pulse Oximetry was hailed as the...