One of the great character actors of all time was Burt Mustin. He spent most of his life as a salesman and amateur actor. After retiring from sales, he started a new career at 67 as an actor. He appeared in hundreds of movies and television shows, working up until about a month before his death on this day in 1977. His longest running performance was as “Gus the Fireman” in Leave It To Beaver.

To save you the bother of looking up his picture, here it is, 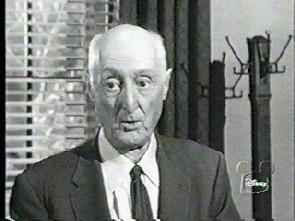 I guess he was neither too old to work, nor too young to retire!